Skip to content
Press Enter / Return to begin your search.

If you were going to any independent industrial or noise shows in Detroit between 2000 and 2004, you know who DeLIEN is. I first arrived in Detroit in 2000. In fact, it was the day of the Bush v. Gore election and after having driven 2000 miles, I stayed up watching CNN battle itself to declare a winner. By the summer of 2001, I was very familiar with DeLIEN, and for good reason: these guys were truly carrying the torch for the spirit of industrial music and they were performing regularly. My introduction to DeLIEN was right when bands like Covenant and VNN Nation were really soaring in popularity with the self-identified “industrial scene”: This was the dark trance stuff that people were spinning in cyber-goth clubs, and this is what people were calling industrial music. Long gone was the days of Wax Trax!, Skinny Puppy, Throbbing Gristle and everything amazing that I had understood the genre to be. But in the middle of this, in one of the most industrial, post-apocalyptic looking cities in the world, were a few bands really carrying the torch for the old spirit of industrial music, and DeLIEN was the very best of the pack. 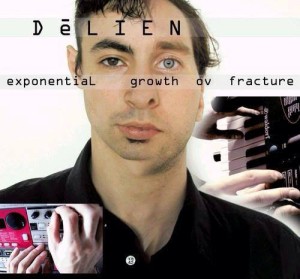 DeLIEN’s “Exponential Growth ov Fracture” materialized during this time period, and represents everything that Detroit industrial was about. The music here was performed live, this isn’t just pre-programmed sequences, these guys were jamming and improvising live and recording. Understanding this is critical when listening to this album because this album sounds great anyway, that it was composed live and with improvisation makes it even more impressive. The live sequences and drum patterns hit hard, and represent heavy duty, Detroit style industrial. When I think about Detroit industrial, I fondly recall shows hosted in half abandoned buildings in the darkest alleys of downtown Detroit, where DeLIEN headlined a dozen noise bands at the tail end of 10 hours of non-stop music. This album represents all of that spirit and energy. A huge part of this is nostalgia for me, but it is also about the amazing music. There are many highly intricate layers of sound: glitches, noise, complex beat patterns, the list goes on.

Technically, this album was first released about ten years ago, but it was on CD only. I still have my original hand-printed copy that was delivered in a static-free pouch with grey spray paint on the disc face. These guys have been inactive for a few years and have reissued this online to generate some funds so they can get back together and record. So get over to Bandcamp and pick this up. These two gentleman live 1000 miles apart now, and the world really needs more DeLIEN style industrial.

Daniel is the administrator of Bottle Imp Productions and founding member of Life Toward Twilight.

This site uses Akismet to reduce spam. Learn how your comment data is processed.

In DeLIEN’s case, a lot of the freshness comes from 1) They’re really good at mixing down and 2) Their sound and composition style was unique enough (despite being somewhat categorical) to make them still sound like they’re pushing new boundaries. I’m eager to hear what they do when given the chance to work on new material again.

Wow, I haven’t listened to this kind of Industrial in a long time. But what I have been listening to is Breakcore. I think extreme electronic music has looped back around and is biting it’s own tail. Not that I’m saying that there’s nothing new or interesting but it’s curious that something created over a decade ago can sound so fresh and new. It also has a Meat Beat Manifesto vibe, which I also like. Cool stuff.